Wrapped snugly around the hips, the pagne was tucked closed at the waist - except I didn't trust my wrapping skills, so I often concealed a safety pin in the folds.

When I applied to Peace Corps in 1975, I knew I wanted to go to francophone West Africa. I’d done a junior year at the University of Dakar, spoke French, and hoped to go back to a Sahelian country. So I walked into Peace Corps headquarters in DC and described what I wanted, and they handed me a packet titled “Health Education in Niger.” That’s how I found myself in Aderbissinat, on the edge of the Sahara Desert, wearing Tuareg clothing to work almost every day.

Arid and windswept, Aderbissinat was the most remote Peace Corps health post in Niger. The townspeople were mostly Tuareg goat and camel herders and sedentary Hausas, who practiced trades. There was a small Arab community of shopkeepers, and Bororo Fulani cattle herders came in from the bush to sell their milk and cheese in town. Most villagers lived in banco or mud-brick houses surrounded by mud walls, forming family compounds. Ringed around the village were poorer dwellings, tents made of sticks and mats. These mostly housed herders who had settled near town because their animals had died in the drought. Farther out were the camps of nomadic Tuareg, who migrated seasonally with their herds.

The three-room health dispensary was staffed by Camara, a Nigerien nurse, and Ejongar, the janitor, who in addition to hauling water and cleaning was also tasked with bandaging wounds and giving injections. My Peace Corps partner and I held weekly prenatal and well-baby clinics, and every afternoon we did home visits. We showed mothers how to make weaning foods, mainly millet gruel. To treat infant diarrhea we demonstrated a rehydration solution of boiled water, sugar, and salt. We did all our work in Hausa, which served as a lingua franca for the town’s different ethnic groups, as very few villagers spoke any French.

All births in Aderbissinat took place at home, assisted by a midwife or a female relative. For a difficult labor the family would call us, certain that we had obstetric skills – though we insisted we did not. We visited new mothers and their infants every day for a week, checking for problems like a postpartum fever or infected umbilical stump. From time to time one of us would get on the camel Peace Corps bought for us and spend a few days visiting Tuareg camps in the bush. We’d see newborns and pregnant women, treat conjunctivitis and fevers, and do some health education on whatever topic seemed needed.

We did all this with four-year liberal arts degrees – in my case, in political science. It was never clear whether Peace Corps understood how much medical work we were being called upon to do in Aderbissinat in addition to the health education that was in our job description.

Whenever I left our compound, I wore an ankle-length pagne or wrapper in solid black (Tuareg style) or a colorful print (Hausa style). Traditional dress was expected of us; we couldn’t have kept women’s trust had we entered their compounds in pants. Wrapped snugly around the hips, the pagne was tucked closed at the waist – except I didn’t trust my wrapping skills, so I often concealed a safety pin in the folds. Local women wore two pagnes, one atop the other. I wore only one, and they noticed this, but decided it was fine because they knew I also wore underwear.

I would pair the pagne with a Tuareg blouse. I had a black one and a white one, made by a local tailor, with contrasting embroidery around the neckline. These loose, flowing garments were open at the sides, allowing glimpses of whatever was underneath. That didn’t matter, as I wore a bra – another luxury few women could obtain. In any case, a woman’s bust was considered mainly functional and not a matter of prurient interest to anyone.

Inside our compound, we wore what we pleased. And when we rode the camels out of town, we wore jeans. Teetering on a camel’s hump seven feet off the ground was alarming enough without having one’s legs tightly bound in a wrapper held in place with a safety pin. 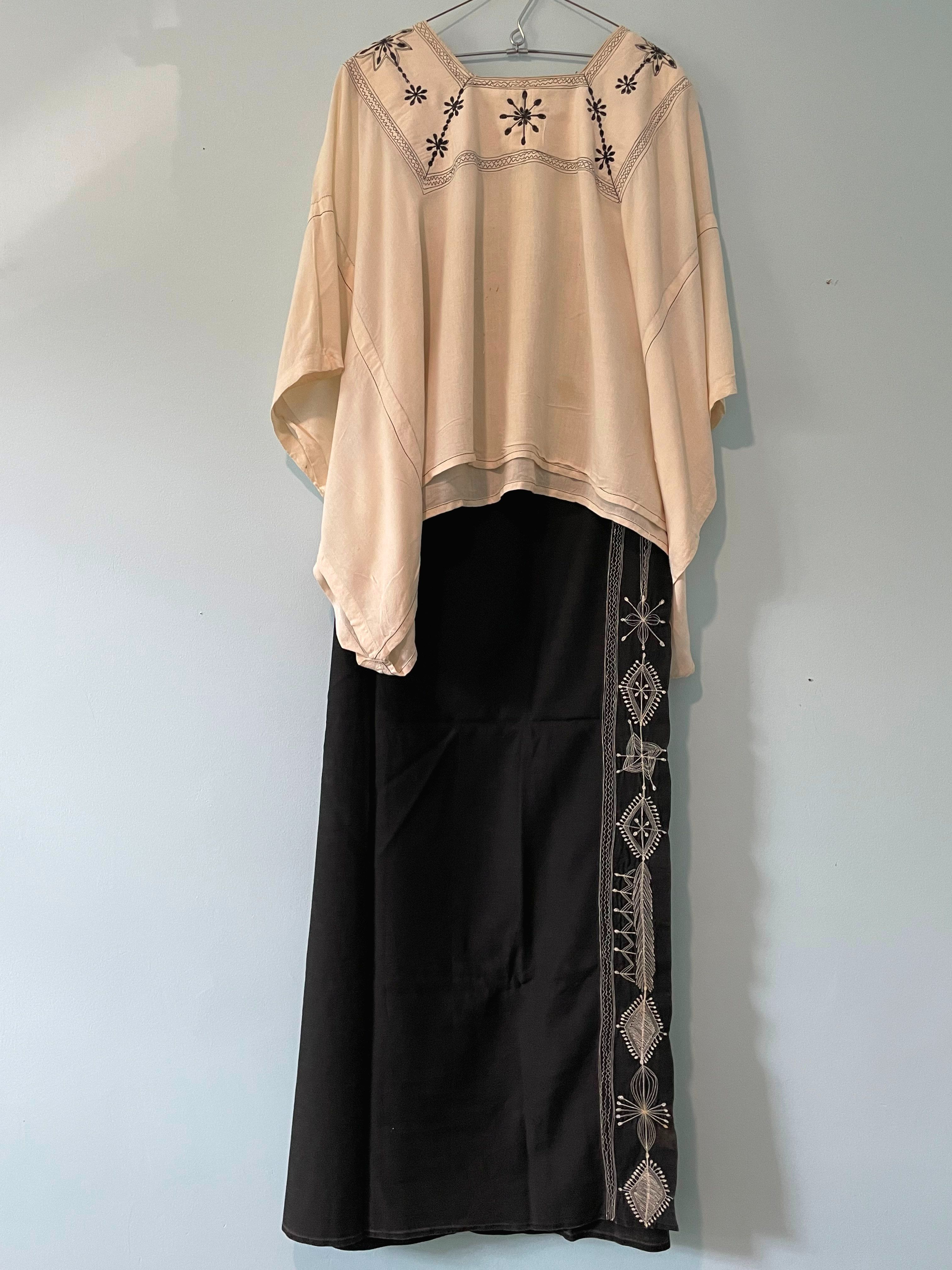 Tuareg pagne and blouse that I wore daily 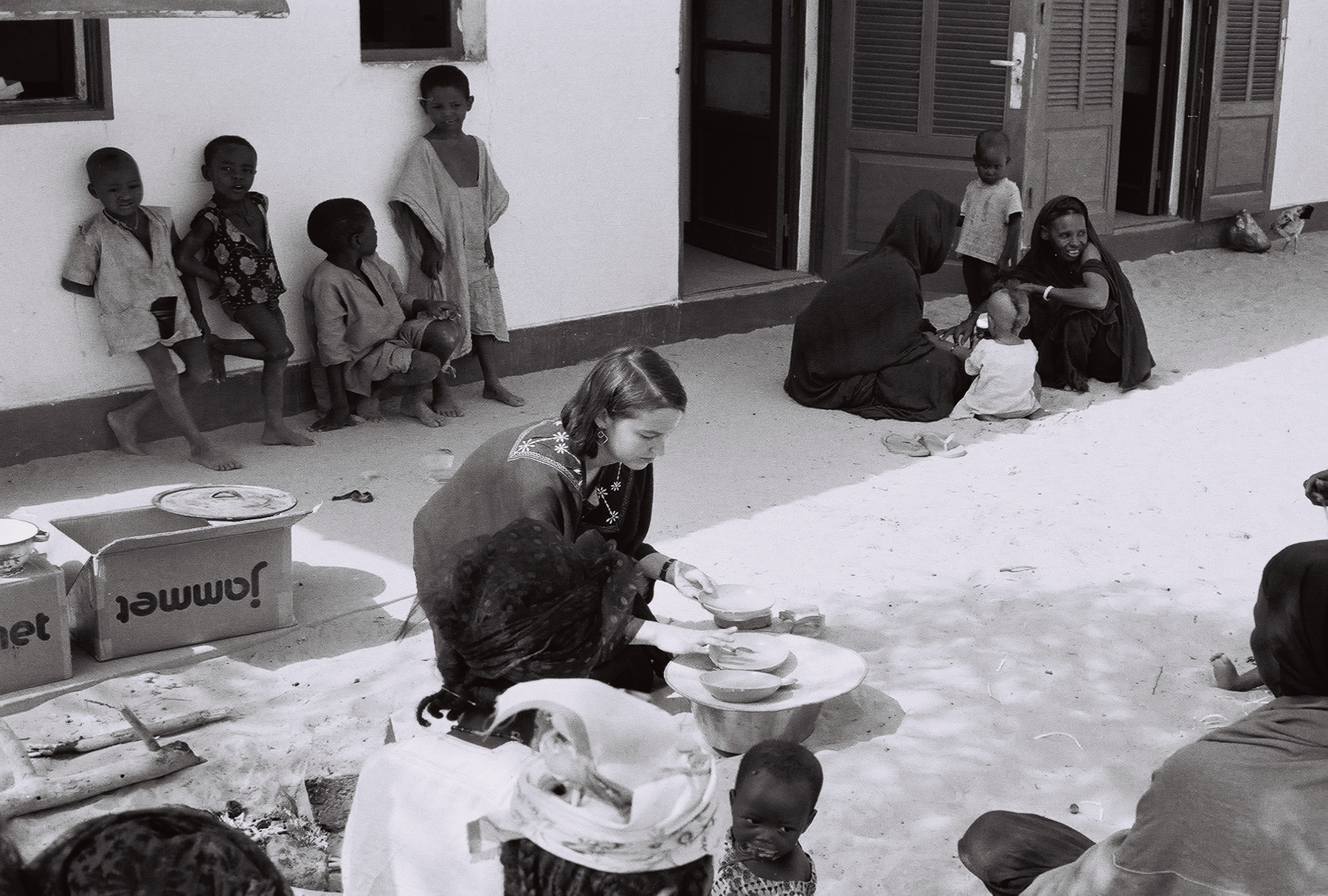 Cathy demonstrating preparation of weaning food in front of the dispensary, wearing a black Tuareg blouse and pagne 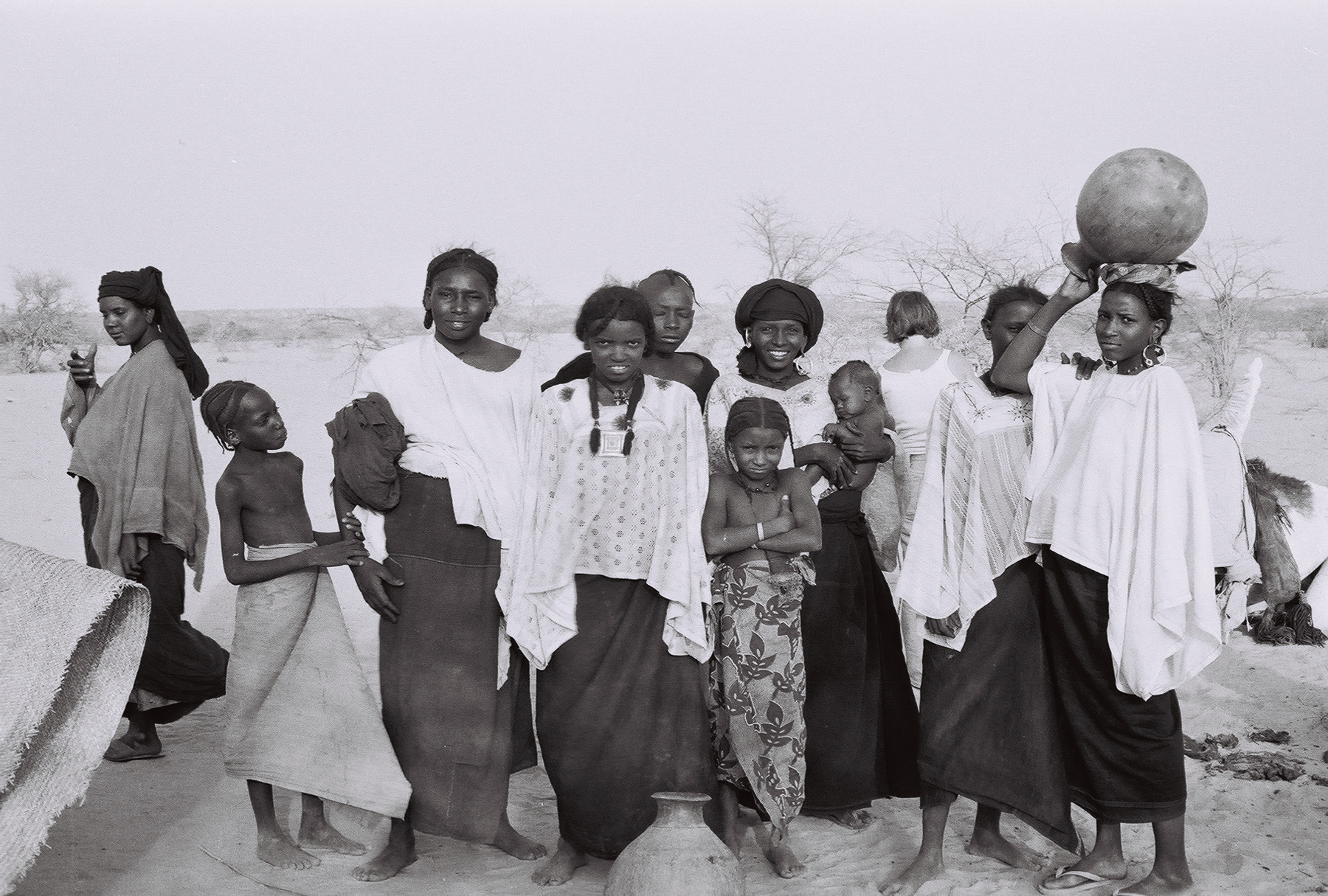 Tuareg women in their camp outside Aderbissinat