I was ready to leave my magical, down-to-earth home at Bwiru Boys’ Secondary School, near Lake Victoria. On a map, the lake looks like a big hole in East Africa.  Up close, it is a stunningly beautiful body of water, my gorgeous view during three years in East Africa.

When it was time to return home to Illinois, I could not decide what to bring my family and friends. I bought a number of carvings, native musical instruments, and national costumes from markets in the closest town, Mwanza, a bumpy four-mile drive from my school.

My assignment in Tanzania started in 1961.  I was part of a pilot program for the Peace Corps called TEA—Teachers for East Africa.  This program was initiated by President John F. Kennedy in February 1961, just one month before he signed the Peace Corps into law.  TEA was a clear precursor to the Peace Corps, except that it involved British and American volunteers and was limited to three countries: Kenya, Uganda and Tanzania. The project was instrumental in expanding secondary school education following independence in all three nations from 1961 and 1963—a time when there were a mere handful of secondary schools in these countries.

Teachers College at Columbia University trained the initial group of 60 volunteers preparing to go to Tanganyika (as the British U.N. trust territory was known before achieving its independence in December 1961). TEA provided orientation for new volunteers at Makerere University, Kampala, Uganda.   From there, I went to Bwiru Boys’ Secondary School to begin my service.

This school was founded by British authorities in 1920 but had just come under Tanzanian government authority.  Eventually, Peace Corps volunteers were assigned to other schools as well as to my school, and TEA Africa merged with the Peace Corps.

In my local travels, I took many color slides that revealed details of my daily life as a volunteer— teaching biology, chemistry or physics; helping boys pile into trucks on the first leg home to widely dispersed parts and tribes of the country; or snapping pictures of animals on our jaunts over to nearby Serengeti National Park, which I often visited, with my American, British and African fellow teachers.  Before I returned home, l mailed all my photos back to my family to be developed.  I never saw these photos while I was in Africa.

In 1964, Peace Corps/TEA told me to pack my belongings in a crate strong enough to survive a drop on concrete from a one-story building (or the deck of a trans-oceanic ship). Skilled local carpenters built the crate. I wrapped my gifts in durable burlap, tied with sisal hemp rope, Tanzania’s vital export.

I arrived at Idlewild airport in New York City with only a dime in my pocket. I called my aunt and uncle and asked them to please collect me.  When I arrived home, I discovered that my parents had viewed my color slides, read my letters, and listened to the reel-to-reel recordings I sent home.  They heard the rain hitting the school’s metal roof and my descriptions of the pupils. Even before they opened my gifts for them, my family was emotionally connected to my three years in Africa.

My mother Grace removed the burlap from my crate. As an established artist, she was inspired to create a collage/oil painting on the burlap that she named “African Sunset.” The abstract work, bold and thick with paint, is a romantic expression of what my mother thought I viewed on the shores of Lake Victoria—the boulders high above the banks, the dark years of wondering and worrying about her son, mixed with her cathartic powers of imagination.  Her painting told me that she understood my motives to serve as a teacher in Tanzania. Yes, I wanted adventure and excitement, but I also wanted to do something good. At Bwiru Boys’ Secondary School, I came to identify myself as someone who gives my talents and time to serve others. 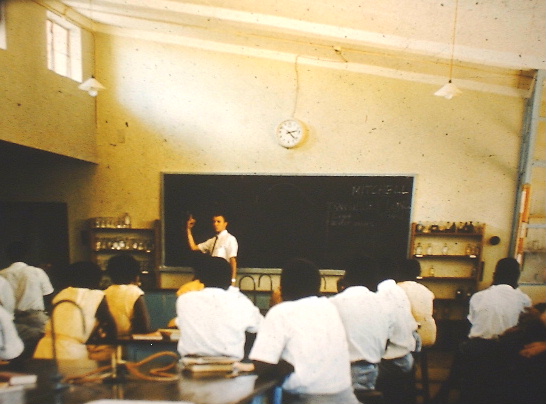 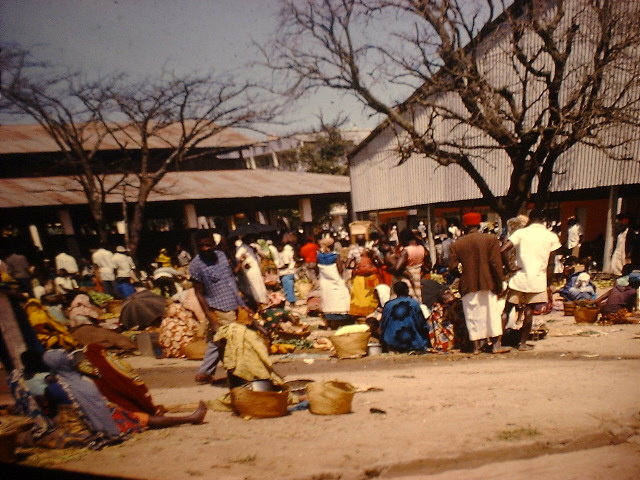